Here is the story Jamie sent me... 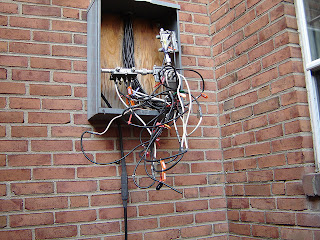 Comcast Sucks Balls. Really. Big fat sweaty bull balls.‏
We live in an apartment where the Home Owner's Association has a contract with Comcast. We never used the HOA provided, and instead signed up for our own Comcast contract, as the only other provider here is AT&T, and we all know how good they are . . .
So in January of this year, the HOA cancelled their contract with Comcast. Comcast proceeded to make a very large error, which is expected of a company run by monkeys and hyenas. They made the mistake of cancelling our contract as well. After a few days of wondering why we had no internet or television, we finally called the Comcrap Customer Headache Service. They told us the HOA cancelled our contract, so we told them we were not part of the HOA contract. They politely, but in a somewhat confusing way, that they will fix it, and we will have our Comcrapola service back within a half hour.
Here is where Comcast scores their single point, we got the service back in about 10 minutes. But when we got our bill, we had 4 "Change of Service" and cancellation charges, with two of them being refunded. So our bill was drastically high, despite us having anything to do with the HOA contract and anything else getting cancelled. Tried calling, after several operators that barely understand English, even though you could tell they were Americans, I gave up on contacting them. We had no choice but to fork over the money to this company that makes Bernie Madoff look like a saint.
So the next month comes, and our bill is $50 more than we should be paying. Finally, and this came as a surprise and even a bit of relief, I got hold of a literate customer service rep. Explained the situation, and asked why the bill is so much. They politely told me that when we cancelled our contract, and then reinstated it, it voided our promotion price, and we must pay the normal, Day to Day price. The politeness ended after I reinformed them that we never in fact cancelled, and they made the mistake. After a few minutes of a sermon from the no-longer-polite customer service rep, I proceeded to use a very bad word, for only the second time this year, and ask her if she knew when FIOS is coming to the area, and hung up. Ended up paying the bill today.
So on to next month, and another phone call to the Comcast Hyenas when the bill comes in.