I hate these asshats with a passion!‏ 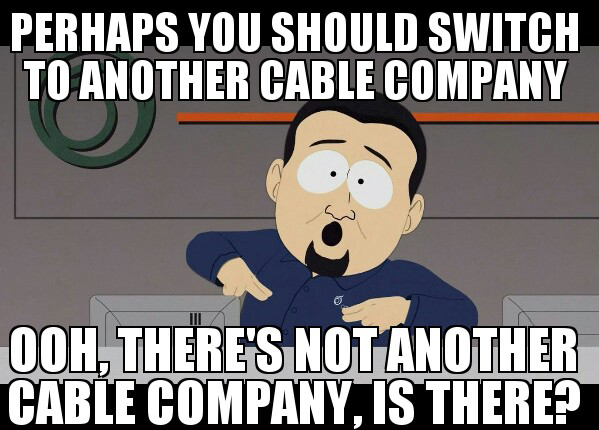 So here's my "Comcast Saga".

Living in a medium-sized city in the South, my options for connectivity to mass media are limited. Basically, for video service I have a choice between satellite (sorry, I like to watch tv, even when it rains) or, due to the monopoly set up by corrupt city politicians, Comcrap. For internet service, I'm limited to, again, Comcrap, or the ploddingly slow DSL provided by the almost-equally-moronic idiots from CenturyLink.

Tired of not even being able to watch a movie on Netflix without the inevitable stutters and freeze-ups, and also sick of my landline phone service breaking down every few months, followed by the usual crack team of inbreeds arriving a week or so later to spray paint my yard, change out wires, and leave said wires draped across the lawn unburied for 3 months thereafter I decided to cancel CenturyLink service. Hell, no one but telemarketer maggots ever call the landline anyway.

So I switched the security system to a mobile-based monitor and decided to go with Comcrap for internet service. I also had an issue with a hinky-acting older model DVR so I unhooked everything and tossed it in a box and headed to Comcrap to replace it and sign up for their "blazingly fast" internet service at 8am on a Saturday morning.

Now, I thought I was in for long lines and rude employees but I will admit, Comcrap has made some progress in the service quality of their local offices. There was a line at the door, but once everyone was let in, I was able to get to a window right away. They've remodeled into sort of an open plan lobby where you can log in on an iPad and get called up when your number and name comes up on a screen. Since there where about 8 customer service reps, waiting time was minimal. The reps were friendly and tried to be helpful.

There. That's it. The only good thing I have to say about Comcrap.

So I got my shiny new DVR box and my new modem/router and headed home to hook everything up and get the devices started, buoyed by my unexpectedly positive experience at the local office. "I'll be up and running in minutes!" I thought. Here is where the Comcrap of old reared its ugly head.

I got everything connected and decided to call and activate the internet service first, then call again to activate the new DVR. So I called, got the usual recording, entered my account phone number, "yes" to "activate new equipment," "yes" to "internet service". Then, I got "We're sorry, due to temporary service issues in your area, we cannot activate new equipment at this time." Wtf? I'm sitting here watching the tv in my bedroom and every channel is fine. So I called back, went through the prompts and this time was transferred to one of the inevitable Hindu "service techs". As I tried to decipher her song-song English-like patois, I did as she suggested, tried hooking up to various outlets, double-checking connections, etc. Though I was able to set up wifi, I could not get an internet connection no matter what I did. Finally, Raj's sister from Big Bang Theory gave up and set up a service appointment at my house for the following week. I was perturbed but she insisted "Nearest time for appointment I can give." (I'm guessing, hearing this, that despite my positive experience at the Comcrap store, things haven't really changed that much after all. I'm also surprised to learn that apparently Yoda was from India.)

Well okay, I'm stuck without internet for a week, I'll still get the new DVR box up and running! Bzzzz! WRONG!

So I called the setup number again. Went through the prompts. Same deal. Some sort of mythical problem prevented them sending a signal to boot up the DVR as well. I called three more times. Same answer. (Remember: all this time during a supposed "outage" my other cable box is working just fine.)

Finally, failing to get a tech, I called Comcrap's main number. I get a tech after about some time and go through everything again, checking connections, turning the box on and off, the usual rigmarole. Still nothing but digital snow. Finally the tech says there's an outage in my area. I told her I knew that but asked why my other tv and box were working fine. Ignoring me completely she said the outage had been going on since the 24th. I told her that was three days ago and asked when it was due to be fixed. Ignoring the fact that it had been three days without the supposed "outage" being fixed, she told me it would definitely be up-and-running by 3 pm that afternoon (about 1 1/2 hours hence). So I decided to try again later.

So an hour and a half later, you can guess what happened. Still no fucking service, of course. This time I was offered a recorded option of getting a callback when the "outage" was rectified so I could continue activating my new devices. The rub? They only call back during "normal business hours"! That's right! They only "callback" 9-to-5 on weekdays!! So their whole "24 hour service promise" is also a lie! Figures.

So after several more calls to recordings I again call the main number and got a tech who had some kind of undefined Spanish accent. Or something. Again I went through the whole run-through. Again was told about the fantasy "outage". But this time, he managed to send a signal through. He told me to wait 45 minutes, then turn the box off and on, and it should be working. Uh huh. And I got a bridge in Brooklyn you can buy on eBay. Of course it wasn't working.

Furious, I called again and was told the phantasmagorical, magical mystery "outage" should be resolved by 4:30pm. On subsequent calls I was told 8:30pm, followed by 10pm and finally 11am the next day. So I waited until the following day and was still unable to have my new service activated. Keep in mind this supposed "outage" doesn't actually exist, as my other box is getting a signal just fine, and has now been supposedly continuing for almost a week!

So now I'm waiting for a tech to come out to my house in a week and expecting the same level of nonexistent service and complete technical ignorance I spent an entire day and a half dealing with already! In the meantime, an acquaintance at work told me they had the same problem connecting a Comcrap internet device a few years ago. It seems that Comcrap's cables are in the same shoddy condition as their garbage, rebuilt in-home equipment and they don't want to spend the exorbitant funds it'd take to lay new cable in all areas. They're using the "outage" story as cover, hoping people in certain areas just give up and never notice the supposed "outage" is never rectified. This friend ended up having to cancel Comcrap and return to DSL service. Nice. This is just a story from an acquaintance, but knowing Comcrap, it's just gotta be true.

Sent from my iPhone
Posted by Admin at 4:36 PM