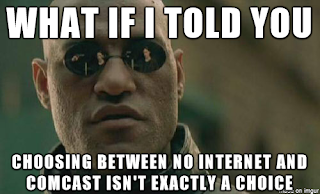 Comcast loves to stick it to you, they do it 359 million times more than their entire work force fornicate with their spouses. They have a lot of workers and even though they don't give 1 fuck, that's a lot of fucks they dish out, fucking you over!

I would love you guys to take a look at this article, and the link to the original is here comcast wants you to suffer. So here's the content friends;

The Wall Street Journal has a great report about broadband data caps this week, revealing something everyone already knows: people really don't like the bullshit that huge broadband companies put them through. Through a Freedom Of Information Act request, WSJ found that consumer complaints to the FCC skyrocketed in 2015 as Comcast in particular started ramping up data cap experiments across the country. Complaints about data caps reportedly rose from 863 in the first half of the 2015, to 7,904 in the second half — and continued into 2016 with 1,463 complaints made as of mid-April. Of course people aren't happy about cable company shenanigans, but only a few companies can get away with it like Comcast can, which is one of the biggest reasons the United States' monopolistic broadband market is a huge failure.

The Journal points out what we've been saying all along: data caps, beyond being a flagrant money grab, are a threat to video competitors like Netflix that exist completely in the "over-the-top" network. It's probably the biggest and most obvious conflict of interest in the communications industry; Comcast, as a company that makes a lot of money off selling cable television to people, has huge incentives to make it harder for customers to enjoy pure internet services like Netflix. So schemes like data caps, which have already been used extensively in the wireless industry to reap as much money as possible from customers, exist solely to frustrate those customers — which is really an incredible situation in a country that ostensibly cares so much about the virtue of competition.

"We everyday contribute to the use and growth of the internet," Comcast executive Marcien Jenckes told the Journal. "There is absolutely no anticompetitive belief or objective." That's such an obvious lie it hurts; Comcast's own Stream TV internet television service doesn't count against data caps. If data caps weren't anti-competitive, why would Comcast give its own internet service a privileged position? The answer is the same as it's always been: Comcast really hates actually competing with anyone.

The conversation about "net neutrality" can often quickly become a nightmare of semantics and pedantry — and ironically I suspect the cable companies have benefitted from it becoming a huge buzzword. That's what happens when you get caught up in drawing the boundaries around words and rules: you can forget what the point of the whole thing was in the first place, or struggle to think about the bigger picture. The big picture is still this: only a few huge companies control both the wireline and wireless networks that everyone depends on. They want to extract as much money as possible from those networks while suffering as little competition as possible. Again, for instance, that's why Comcast chose to try to dominate Time Warner Cable by buying it instead of competing with it.

Comcast told The Wall Street Journal it's "now actively considering substantially increasing" its data caps. Comcast created those data caps in the first place, likely knowing they would frustrate customers. It's no wonder Comcast and its peers want to grind the FCC into dust — it's the only way they can keep playing games with a critical public utility.
Posted by Admin at 10:09 PM 1 comment: