This fall, here in downtown Philadelphia, I was out for a leisurely Bourgeoise stroll through the city with my girlfriend. Walking along a central, upscale street by the park we turned the corner to see countless police and emergency vehicles blocking the street. This was a Saturday afternoon on a beautiful  late summer day. Hordes of people were out at this particular shopping district. Parked at the intersection of the wealthiest neighborhood in the city was the absolutely largest crane I have ever seen. This crane is of the scale where a meager "normal" crane is on-site to construct the "Mamma" crane. It's big, big.  Dozens of people are scattered around staring up at the sky. Dozens of police and emergency peoples were scattered around. Workers galore. Hard hats and the Here's my CumCrust horror story.

Background: I've been a faithful CumCrust internet subscriber for over 15 years. I've had Blast 105 for the last 5 or so, so I'm not just buying the cheapest service they offer.

I moved at the start of last month to a brand new apartment in which I was the first tenant. This is really, really simple stuff; they need to take the old address' network node ID and dis-associate it with my modem and replace it with the node ID of my new address. A toddler could do it.

Three weeks before my move date, I used the XfuckMeUp service relocation web page to set up the move. I was very careful to specify both my old and new addresses. I completed all the steps and the next day, someone called me to set up the installation appointment. So far so good, right?

The day I move in, one of the first things I do is plug in my modem and router. Lo and behold, I'm connected! Yeah! Same IP address as I had at my last address, not that it really mattered. Speed test showed I was getting good bandwidth. So when the tech called to say he was about to arrive, I thought I'd do the decent thing and tell him that everything was working great and there was nothing for him to do. This was a mistake that would prove impossible to un-fuck.

Nine days later, no service. Nothing. I can get an IP address and ping internet hosts, but no traffic of any sort will go through. So I call, and I'm told that there are no services set up at my new address, and my old account has been closed. What? For fuck's sake, I'm trying to continue to give you money, and you arbitrarily dump me by the side of the road? I explain over and over that I've been connected for the last 9 days, and the little sales twit replies every time with "No you weren't." Clearly they have no handle at all on their physical infrastructure. He wants to charge me a $250 installation fee because they need to "verify that the line can deliver your guaranteed speed." I remind him that they don't guarantee speeds, so you'll have to try that bullshit excuse on somebody else; and I've already tested the bandwidth and it's working fine. Just flip the fucking switch back on, okay? Nope, the little nitwit says he can't do that. He tries to sell me some other package that he claims won't need an installation visit. I tell him to cram it and just give me what I had at my previous address. He insists that they have to set up an installation, and that I can plead my case with the billing department as to the installation fee.

So I say fine, I'm the biggest chump in the history of the human race and I love nothing more than sucking rich corporate monopolist dick so please set up another installation appointment several decades from now, and whatever you do please bill the fuck out of me in the meantime while I sit here with no service. So when the second appointment time rolls around...nothing. Nobody shows, nobody calls. Three days later, someone leaves me a voicemail stating that "You cancelled an appointment, would you like to re-schedule?" I'd rather eat the assholes out of a thousand dead skunks than give CumCrust another dime. Case closed.for a construction project of the commercial kind.

When we asked a cop what the hell this thing was doing at this location, in the middle of the streets, on a beautiful Saturday, the answer was that windows were being replaced in a penthouse condo. We watched crates of glass windows being raised into the sky.

Further inquiry revealed that this was the residence of the billionaire CEO of Comcast and he did not like the views afforded in the standard Penthouse.

This crane window thing went on for the afternoon with one crane operator confiding to us that this whole scenario was costing $1,000,000. A million bucks with staff, insurance, install, etc,etc.

Penthouse windows aside, because a billionaire can spend his bucks however he/she chooses, down here in serf land I write this as my girlfriend is back on the phone for the fifth time wondering why our service continues being cut off -even though we have a nearly $300 credit!!! 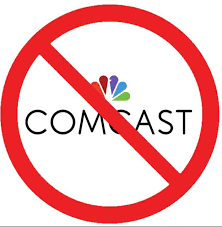 Okay so for about 6 months i had comcast and comcast internet so for the first about 4 months was me calling customer support tying to get the cable box to work which they continuosly said should be working but never did. My internet did the same but then i finnaly got someone who helped me with my internet turned out i mearly had a few cables wrong on my modem. So i keep calling customer support getting no help then i find out that the "technician" never installed the right card in the system since the nearest comcast store i could find was about 2 hours away they wanted to charge me to send a technician to give me the right card. I said no mail it to me. When i finnaly got the damn thing to work after about 2 months my bill jumped from 50$ to 109$. So i called them and asked them why it was so high they told me the promotion i had ended even though i couldnt even use the cable box after going back and forth with this call which lasted about a hour and a half he said "have a nice day" and hung up. I called back ironicaly got the same guy told him to go fuck off if he wants to HANG UP on me and then asked him to cancel my cable box with comcast which he finnaly did. Being without tv i went to my local store and bought a 30$ tv antenne and to this day the only thing i have to worry about with my tv service is if my antenne is pointed right

So, now I have cooled down a bit! called Comcast at 1:00 pm, lady in the Philapine's asked for phone number and last four of SS# and the problem after about 15 mins she could not help me, lady 2 asked phone number and last four of SS#, THIS HAPPENED 5 TIMES SO AT 2:30 I had had enough and hung up on them. I went to the Comcast office it was packed I saw they were on number 37 I took my number F--ck 62 so I waited for over an hour. The guy also could not help me and told me to call Tech Services I told him I am not calling the Philapines AGAIN!!! and asked him for the Tech services in Lynwood he gave the number to me Yay!!. Came home and called the number and guess what I was back in the Philapine's AGAIN I just hung up, so that is how I spent a wasted afternoon
Posted by Admin at 10:20 AM 17 comments: