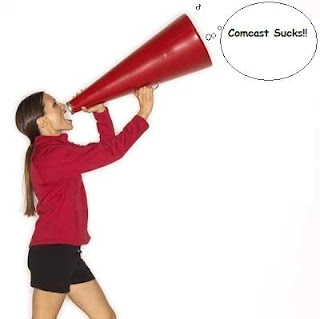 So my cable goes out Monday and I call and wait til Tuesday. Guy comes and talks to my wife and he’s yelling at the operator because they scheduled him during a meeting. So he says there’s no connection coming in the house and says he’ll be back after work. He comes back at 2pm and says it’s the main box and he has to call maintenance for them to fix the box. So I call Comcast support and they guarantee it’s fixed by 8pm.

7:30pm rolls around and I call 8 different numbers and get referred to tons of departments and I proceed to tell them “It’s now 7:45 and I was promised internet, so where is it?” And they say they want to schedule someone to come out quickly, so I’m pissed now and I say let me talk to a supervisor because this is tiring and here’s the best part.

I wait 20 minutes for someone to get on the line and lol, he says “We can get someone out on Friday ( Today is Wednesday ).” I say “ You have got to be kidding me, I want someone out tomorrow” and he says, it’s laughable he thinks this is reasoning with me “ It’s like if you ordered a pest control and the next day you find a bug, so you start all over. So let’s get them to come Friday”. So I call at&t and they’re coming Friday, but they want 249 for install and router. Not sure what I’m going to do, but the nerve of the supervisor to think he’s intelligent. I think that analogy made me more angry that calm.

So yeah ComCast sucks, but at&t is worse. Have no clue who now.
Posted by Admin at 10:23 AM