C. Gann is pissed, and why wouldn't you expect that? 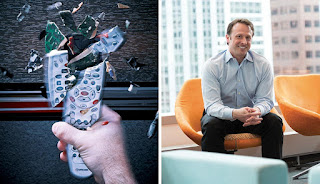 I saw your page, and read through a few of the posts. After doing so I have decided to send you a copy of the email I sent today regarding a billing issue that has not yet been resolved, so it might be added to your page!

I might mention that part of the billing error was a result of the installation technicians reporting that they installed jacks in my house (a cost of $35.00), when they did not, as my house is completely pre-wired with outlets in every room.

A second part of the billing error was due to being billed ($99.00) for a failed self install, however while the technicians were here they informed me that they must electronically activate each jack separately and must be within a few feet of the jack to do so! This confirmed that I would not have been successful in a self install whether service at my house was active or not!

The rep that I first dealt with credited me  the $35.00 without question, when I explained there were no new jacks installed. Then after hearing what I was told about the self install she said the best she could do was to credit me for 1/2 of the $99.00.  So I was told to deduct $85.00 from the amount due on my current bill, as the adjustment.

For the following 2 months the bill failed to credit me for the full amount, this generated past due reminders, and threats of late fees and/or interruption of services,  which in turn prompted follow-up chats with the reps. Each rep referenced the notes made to my account by the previous one, as well as the chat transcripts.

Each consequently assured me the adjustment had again been made,my account was up to date,and I had a -0- balance owed!  They each repeated the instruction that I should deduct the amount from the printed bill accordingly.

I had assumed that this would eventually work itself out, but then I read a story similar to mine where the customer was actually turned over to collections, which of course negatively effects a credit report!  So in attempt to be pro-active in protecting my credit and my uninterrupted cable and internet service, I collected all the possible email addresses I could find for Rick Germano and decided to send out the email below.

Please feel free to post all or part of this communication for others to see!

I don't know if this email is monitored or not, but assuming it is....

I would like to convey my complete disgust with the current incompetence of your billing department!!

The issue of this "past due amount" has been resolved on three separate occasions over the past 6 weeks!!!!

Yet  I am still receiving these warnings of my account being over due!!

I will not waste more time contacting the chat representatives, as it is not them making this ridiculous mistake!!

It is the billing department that continues to produce and send out these messages!

I suggest the billing staff be instructed to adopt a practice of first researching the notes made to one's account before taking any further action, under the assumption that I owe Comcast anything at this time!!!!!

Considering each time I have had to address this issue it takes at least an hour of my time, besides causing me extreme and undue stress, anxiety, and fear of losing my cable and internet service,

I believe it is Comcast that owes me for wasting my time!!!

I would appreciate an immediate response from the Mr. Germano, and/or a senior manager of the BILLING department, acknowledging  the error, confirmation that immediate adjustments have been made to my on line account activity page, and confirming I will not be charged undue late fees, or the tax and fees that are based on the assumption a larger balance amount is owed (as I have been the past 2 months).

In an attempt to locate a valid email address for Mr. Germano I did an internet search, and what I found was astonishing!  I found this exact same issue written about on numerous web pages, many of them more then five years old!!  I guess I can take some comfort in the knowledge that I am not being singled out with this recurring billing issue, yet I have much concern that after so many years of this happening to numerous customers a standard practice for resolving this problem is not in effect!

I submit that incorrect billing be included in the 'Customer Satisfaction Guarantee' that is publicly promoted by Comcast! Only then will the standard of excellence be raised to a satisfactory level!

If this is not resolved immediately, I may have to reach out to my internet community for advice from some of those folks that have already been through this, on how to get the billing department to do the jobs that my ever increasing Comcast bill pays them to do!!